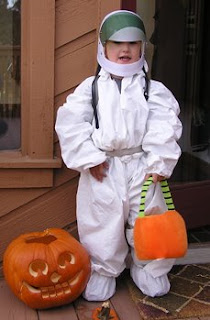 My oldest son always wants to be the leader - a typical first-born, Type A personality. He is the fire chief, the "space man captain," the leader of the pirate ship. He makes his younger brother play Wendy so that he can be Bob.

Even in his imaginative play, he is always the person taking care of others. When teaching his younger brother to scuba dive in Hawaii-connect (he forcefully told me that this was not Hawaii, when I corrected him, but a small island off the coast of Hawaii called "Hawaii-connect"! Who taught this 3 1/2 year old to read a map?), he is the one checking the air tanks and making sure the helmets are strapped and walkie-talkies are operating correctly for undersea communication. Don't you wish your real-life adventures were half as exciting as his pretend ones?
Last night, we saw the nuturer in action in a way that filled my heart with pride but also left me with that gasping for breath feeling of helplessness.
We finally got the boys to bed. On hockey nights in our house, it always takes awhile to get the boys settled down - especially my husband, but that's another story. My husband and I decided to get in the hot tub to check out the stars. Just to set the stage, the hot tub is on our deck which connects to my husband's office. A mere 20 steps or so from my oldest son's bedroom.
We usually wait to ensure that both boys are asleep (my oldest is infamous for getting out of bed 2-3 times before officially giving up the fight and going to sleep). After his second visit to Kevin's office for just one more hug, I ushered "The Captain" back to bed and was sure that he was down for the night.
I jumped in the hot tub, and an hour or so later we made our way back into the house. Our first clue that something was wrong was Alex's door standing wide open and his light turned on. I ran down the hall and found an empty bedroom. We bolted up the stairs and found the door to my youngest son's room standing wide open with the light on as well. Ben was standing up in his crib and Alex was sitting on the rocking chair reading calmly to his brother from an Elmo and Zoe book.

They both appeared to be content (save the fact that it was 10:30 p.m. and Ben was bleary eyed from having been awakened by his older - more antsy - brother). But as soon as I spoke, Alex's eyes welled up with tears, and he exploded into body-shaking sobs. Once Alex lost it, Ben's face changed to a terrified look, and he started sobbing as well. My husband and I each grabbed a kid to console. I took the older one since he seems to need me more in moments of despair.

"Honey, we were in the hot tub. I'm sorry you couldn't find me."
"I wanted to give you one more hug. I just didn't look in the right place. I didn't have my firefighter flashlight. I read two books to Ben."
"You did? Was he crying?"
"No, he was sleeping. But I went upstairs to check on him because I thought you were gone!"
My heart skipped a beat. GONE! The most terrifying feeling in the world for anyone. I had visions of those news stories where a mom has passed out and the kid dials 9-1-1 and waits for someone to come rescue them. Heaven forbid, we had been gone, Alex would have calmly read the entire Sesame Street chronicles and soothed his brother until daybreak when someone discovered them sitting together, and Alex could finally stop being the caregiver and just be the 3-year old he's meant to be.
When did my kid decide it was his job to be responsible for the world? As I soothed my Little Man and rocked him to sleep, I was filled with such mixed feelings. I know for certain that Ben will have a protective older brother who will always look out for him on the playground. But I also know that my studious, serious boy has inherited from me that caregiving urge to ensure everyone around him is safe and happy. Even if it means masking his own middle-of-the-night worries with the words of Elmo.
Labels: Alex, Ben, mothering