Superheroes of the Most Usual Kind 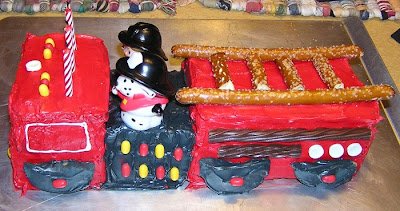 For as long as I can remember, Alex has been obsessed with firefighters and fire engines. In fact, he's pretty much obsessed with anything safety related. Words that make his ears perk up are "smoke," "fire," "rescue," "alarm," "emergency," "ambulance." You get the gist of it. We have to constantly monitor our conversations to ensure that we don't use one of the hot button words which might result in a 20 minute conversation about the specifics of how the smoke detector works or why the ambulance has words written backwards on the front of it. Believe me, I'm very proud of Alex's curious nature as well as his constant quest to ensure that the world is safe from danger and wrong-doing. But, I can only detail the specifics of the inner workings of a rescue vehicle so many times.
Somehow, in the midst of his life full of safety, Alex has gotten it into his head that the most honorable birthday parties are not ones with marketing-laden figures like Nemo or Elmo or even Batman. Birthday parties are about honoring those that make our world a better place. Alex takes superheroes very seriously and won't stand for imposters or wannabes. Last year he carefully considered the job of our college friend Jason and said to me, "Mommy is Fireman Jason a superhero?" In his world, superheroes are real-life do-gooders. Thus the reason that Alex wanted to call Fireman Jason to tell him about the first time he went potty on the big boy potty. Jason, who does not have kids yet, feined surprise and appropriately praised the budding young firefighter who had mastered the most important fire hose - his own!
Given all of the firefighting hoopla surrounding our house, last year Alex requested a firefighter birthday party. The cake was a huge hit complete with Smartys serving as hose hookups on the sides. During our potty training days with Alex, we started using Smartys as a bribe to get him to use the potty. One Smarty for going #1 and two Smartys for going #2 in the potty. It worked pretty well. So well, in fact, that when I brought the cake out at last year's birthday party, Alex loudly declared, "Look Uncle Mark. There are potty treats on my cake. If you're really good, you can have one!"
We played firefighter games. A relay race to see who could put on all of the firefighting gear the fastest. "Pin the Badge on the Firefighter": 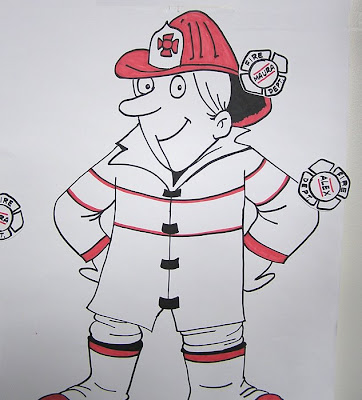 I bought clear plastic ketchup and mustard bottles like you find at a hotdog stand. We filled those with water, and the kids shot the water at the tissue paper in the bank windows to put out the fire. 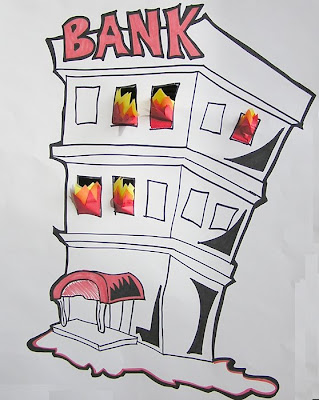 All in all, it was a huge success and although I was happy, I was also slightly concerned that I had set the expectation for even more creative birthday parties in future years. And, I was right!
This year, Alex has decided that he wants a scuba diving party, complete with a scuba diver birthday cake, blue streamers hanging over the windows and an ocean sounds soundtrack so that his guests feel like they are underwater when they get to our house. He has requested a relay race called "Who Can Put on the Scuba Gear the Fastest and Run the Farthest in Flippers." This child's imagination knows no boundaries at the ripe age of 3 years and 350-some days. His list of ideas goes on and on.
I did find a fun picture online of a scuba diving cake made with white cake and blue jello that fits down into the cake to form a body of water supspended in the cake. Now I just have to come up with some scuba diving games and all will be right in the world of superheroes - those that rescue, those that save and yes, those that dive!
Labels: Alex, birthday, birthday party, cake, firefighters, games, mothering, scuba divers, superheroes

Ahh, so cute! We had a firetruck birthday for my eldest a couple of years ago, and I did a similar cake (though I love the puppies you added!). We even had the fire department come out for a visit. Hopefully its these kinds of birthdays our kiddos will remember!