The Song of Purple Summer...or Red Fall (as it were) 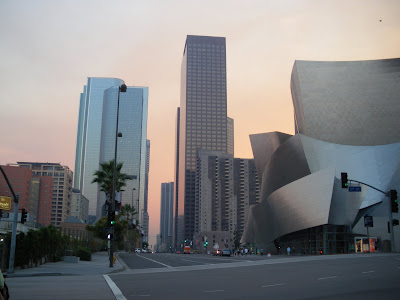 In November, Kevin and I took a long weekend to visit our friend Brian in Los Angeles. It happened to be the weekend of the wildfires that were engulfing southern California. This picture was taken in broad daylight (not at sunrise or sunset). The eerie pinkish haze was the bi-product of the smoke filled skies. It made for a beautiful pic - although not very beautiful breathing.
This picture was taken after a day in downtown Los Angeles. Although I've visited L.A. multiple times in my adult life, I haven't spent much time downtown. Our friends have always lived in Santa Monica or Hollywood. We've either hung out at their local haunts or spent time walking the Santa Monica pier or the boardwalk in Venice Beach. It was a monumental weekend for visiting downtown L.A.
First off - the wildfires. The town was hazy and smoky and abuzz with the latest news of where each fire had spread. To most L.A. residents, it must be second nature to see Ahh-nald on the news every night, but I'll admit, it's still a novelty to me to take the Terminator seriously when he's talking about a state of emergency.
In the midst of all of this, this was also the weekend of the Proposition 8 protest marches. We took the subway down to City Hall to check out the spectacle of it all, as well as show our support for the protesters.
As we walked to City Hall, the newspaper boxes were filled with pictures of Sean Penn's face. Milk was schedule to be released the following week. Brian, who is friends with Dustin Lance Black (the writer of Milk's screenplay), was reveling in how crazy it was that this group of guys that he calls friends could very likely win an Academy Award for their work. How prophetic. 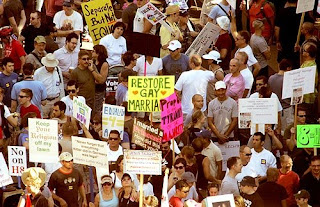 It also didn't escape any of us the significance of the Prop 8 marches in the wake of Harvey Milk's recent popularity resurgence. Just 30 years before (almost to the day) Harvey Milk's life was taken from him at the San Francisco City Hall. And now here we were watching a fight for the same basic human rights that Milk believed were not only possible but deserved by all. Two steps forward and one step back. The story of our world!
After the rally, we made our way to the Ahmanson Theatre a few blocks away to see Spring Awakening. Brian had seen the original Broadway production, but this was our first time. I have to say simply that I loved it. Spring Awakening is one of those shows that people either loved or were indifferent about. When I've gushed to friends in the theater community about how much I enjoyed it, some have shrugged it off with, "Oh, it was okay."
Let me qualify the "I loved it" statement. It wasn't like being that 15 year old sitting in a theater in Chicago watching Les Miserables for the first time. I loved that show with every fiber of my being. The music, the staging...everything. But I was also 15, and I loved (and hated) everything with that sort of passion.
I loved Spring Awakening intellectually. It didn't move me emotionally. I wasn't weeping at the sad ending. But the music was exciting (I'm always a sucker for a cello), the concept was unique, the lyrics were poetic. The staging was creative and the lighting was phenomenal!! Loved the blue lights that came down during the second act.
And to this day, whenever "The Song of Purple Summer/I Don't Do Sadness" comes on my ipod, it takes me back to that weekend in November. The orange skies filled with wildfire haze, the red faces of those fighting for their rights that had been revoked, and the purple summer of that small moment in Spring Awakening when Ilse still has hope in spite of all that life has taken from her.
Labels: harvey milk, milk, prop 8, song of purple summer, spring awakening, theater, travel