I'm sitting in my dining room as I'm writing this, and my house is slowly but surely starting to resemble this picture. Sorry for the poor quality. It was all that I could find online. 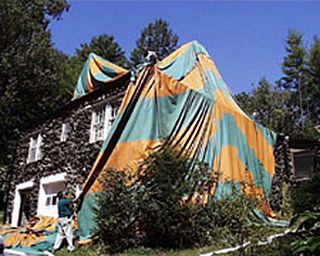 The Stain Guy is here masking all of the windows and doors so that he can spray the house tomorrow. Thankfully our masking is opaque plastic, not the striped circus tent. But I still can't see out of my windows - which is a little disconcerting. One of the few X-Files epidsodes I ever saw had one of these creepy "circus tents" in it. Somebody got trapped inside the house and was impregnated by a reptilian-like thing. Think the alien at the end of Signs. It's okay to admit that you were sorely disappointed at the end of that movie too. Gah! But everytime I walk by my television today, I'm looking for the reflection of the eewy alien guy coming to plant his seed in me. And believe me, some days a 10-week old is similar enough to an alien...I don't need another one growing inside me yet.


Bailey (I don't think that Bailey has made the blog yet, so here's a picture): 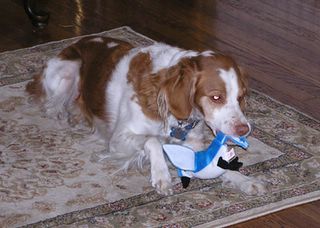 Yes, that's a bird. We won't let her hunt the real thing, so it's the least we could do.

Anyway, Bailey seems to be recovering from The Great Impaling. Somehow the dog impaled herself on a stick or something in the nether-regions. No, not right there but close enough. This all stems from my husband claiming he's clever enough to teach our dog speed-elimination techniques. When Bailey goes outside she runs as fast as she can to the field of 2-foot high grass that is our yard, and squats down as quickly as possible to "do her thing." I'm convinced this is because she doesn't have time to mess around with primitive tasks. There are birds to be hunted and elk poop to roll in.

When a friend commented on how quickly Bailey gets the job done, Kevin smiled and proudly stated that he had trained her to do this. Hah! So this is what he did all those years while I was at work. Husband and dog joyfully sprinting to the yard in a race to see who can water the flowers first. Hmmmm... We all know that you can't train a dog to squat quickly. They have to sniff around, turn in 482 circles, get distracted, and repeat before settling in. But if my husband was in fact running pee-windsprints with the dog, then he has no one to blame but himself for The Incident.